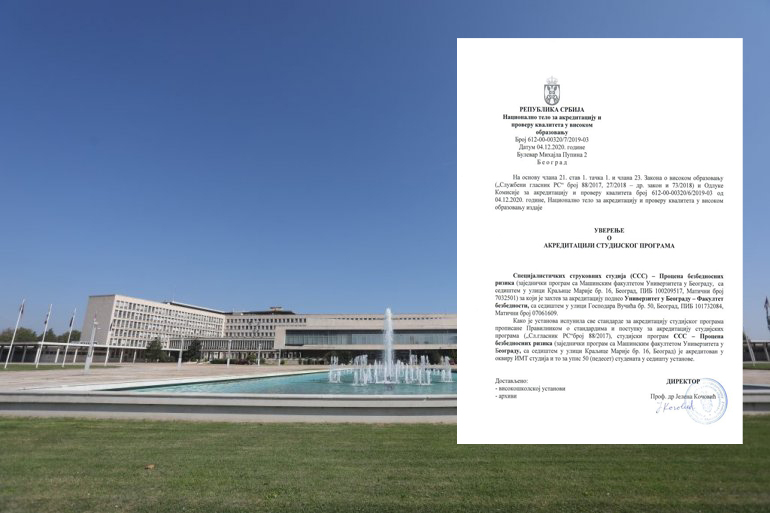 The student chooses one module with all the subjects in it.

Additional qualification: Internal auditor of the integrated management system / or Management representative for management systems and Certified expert for risk management of pressure vessels and risk assessment in inspection supervision

The Belgrade conference was the inaugural part of the public-private Eurasian Energy Forum partnership aimed at connecting key international actors in government and business through a series of conferences to be held yearly in a European or Asian country.

The Forum concerns all aspects of energy security and critical infrastructure security and strives to establish a cooperation model for regional academic integrative processes and interregional initiatives as well as to ensure peace and stability across the vast area of Europe, Middle East, North Africa and Asia. At the same time, the Forum aims to create the conditions for fostering agreement frameworks between state and private actors on a voluntary basis. As one of the first countries to support the initiative, Serbia hosted the inaugural conference.

The inaugural conference in Belgrade set in motion discussions on academic and geopolitical aspects of energy security, critical infrastructure in Eurasia, ongoing and future economic projects, and perspectives for coordinated interstate cooperation in the area. Talks at the conference focused on various forms of cooperation – scholarly, geopolitical and diplomatic – on the introduction of necessary legal provisions, investments and specific projects relating to oil, gas, renewable energy sources and water supply, with special focus on the security of electricity supply. The project and conference were launched in November 2017, when the co-organizers signed a general Memorandum of Understanding, creating the formal conditions for the beginning of practical cooperation at the inaugural conference.

The conference also included the Euro-Asian Youth Council meeting, held on the second day. It brought together students and researchers in these areas with the aim of establishing a strong academic network of Eurasian universities.

First Day of the Conference

Numerous officials from Serbia and abroad, diplomats, entrepreneurs and academics attended the first day of the conference. Donald D. Dudenhoeffer, Director of Operations of the Energypact Foundation, was the forum’s conférencier.

In the introductory session, the attendees were addressed by professor Vladimir N. Cvetković, Dean of the Faculty of Security Studies, Zoran Predić, State Secretary of the Ministry of Mining and Energy of the Republic of Serbia, Veljko Odalović, Secretary General of the Ministry of Foreign Affairs of the Republic of Serbia, and Alexandre S. Dimitrijević, President and Executive Director of the Energypact Foundation.

The conference was officially opened by the Minister of Mining and Energy of the Republic of Serbia, Aleksandar Antić. He emphasized the significance of connecting different actors in developing a joint energy policy that will be an integral part of international relations and a source of political stability. Minister Antić’s address was followed by the ministerial statements of Péter Szijjártó, Minister of Foreign Affairs and Trade of Hungary, Barsaman Pun, Minister of Energy, Water Resources and Irrigation of Nepal, and George Stathakis, Minister of Environment and Energy of Greece. The first day also saw numerous bilateral meetings of the attending ministers.

In the Introductory Special Session, the attendees heard from Alexander Dybal, Deputy Director General of Corporate Communications in Gazprom Neft, and Yiwei Wang, Director of Institute of International Affairs of Renmin University of China.

The first session of the day, Energy Security: Enhancing National Security and Global and Regional Stability, initiated the discussion on energy security as a major segment of regional and global stability, with special focus on the Eurasian macroregion. The speakers and panellists included Branko Kovačević, Chairman of the Board of Directors of Public Enterprise “Elektroprivreda Srbije”, Andrey Kazantsev, Director of the Center for Central Asia and Afghanistan Research, MGIMO University, Daria Melnik, Advisor of the Energy Department of the Eurasian Economic Commission, Žarko Obradović, Chairman of the Foreign Affairs Committee of the National Assembly of the Republic of Serbia, Anita Richer, Programme Manager for South East Europe, OECD, and Petar Stanojević, Associate Professor at the Faculty of Security Studies, University of Belgrade.

In the second session, International Cooperation and Oil and Gas Supply Security, the participants engaged in constructive discussions on whether international cooperation enhances oil and gas supply security across Eurasia. The audience heard from Milan Zdravković, Executive Director at Srbijagas, Gulmira Rzayeva, Senior Research Fellow at the Center for Strategic Studies under the President of the Republic of Azerbaijan, Károly Banai, Senior Advisor at Nord Stream 2, and Branislav Todorović, Research Associate at the National Technical University of Athens (NTUA).

Second Day of the Conference

The second day of the First Euro-Asian Energy Security Forum was opened by First Deputy Prime Minister and Minister of Foreign Affairs of the Republic of Serbia Ivica Dačić.

The next session, Diplomatic and Geopolitical Challenges of Global Integration Processes, launched a discussion on the impact of diplomatic and geopolitical challenges on global integration. The speakers included Dmitry Pankin, President of the Black Sea Trade & Development Bank, Vladimir N. Cvetković, Dean of the Faculty of Security Studies, Andrey Kazantsev, Director of the Center for Central Asia and Afghanistan Research, MGIMO University, and Yiwei Wang, Director of Institute of International Affairs at Renmin University of China.

The final session of the forum, Euro-Asian Youth Council: Challenges & Opportunities of the Integration Processes in Euro-Asian Space, provided the platform for young people to exchange opinions on the growing challenges of political and economic integration in Eurasia. The Euro-Asian Youth Council will encourage academic and professional ties between students and researchers in Eurasia and promote institutional cooperation among Eurasian universities. The speakers in this session included Ivanka Popović, Rector of the University of Belgrade, Danilo Potparić, Student Pro-rector of the University of Belgrade, and Mohammad Allagha, Secretary General of the Euro-Asian Youth Council.

Media Coverage of the Conference